ABATEMENT AND TRENDS IN EMISSION

Figure 5 shows the change in global emissions of SO2, NOx, and NH3 for the different source categories. The figure shows that there is a steady increase in emissions for the three gases between 1890 and 1995. The contribution of energy emis­sions is highest during the whole time period for SO2 and NOx; for NH3, energy constitutes only a minor contribution. After World War II, the increase in emission is higher. 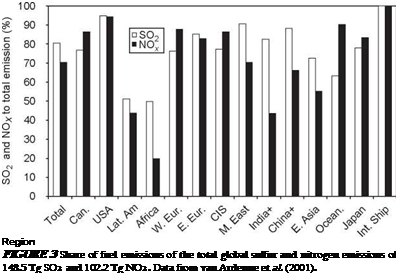 After 1990, there seems to be a smaller increase in global emissions. This is mainly due to the decrease 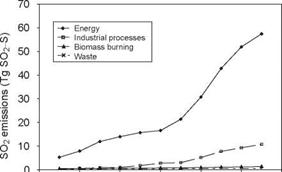 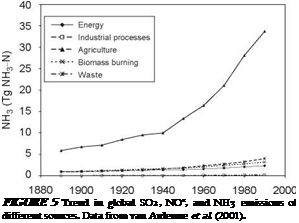 achieved through protocols under the Convention of Long-Range Transboundary Air Pollution, with the multipollutant-multieffect protocol signed in 1999 in Gothenburg being the most recent.

Aggregation using price has its shortcomings. Prices provide a reasonable method of aggregation if the aggregate cost function is homothetically separable in the raw material input prices. This means that …

The history of human culture can be viewed as the progressive development of new energy sources and their associated conversion technologies. Advances in our understanding of energy have produced unparalleled …

ECONOMIC GROWTH, DEMAND, AND ENERGY USE

On a per capita basis, rising demand for mobility is well correlated with growth in gross domestic product (GDP)—a measure of national economic activity—across a wide variety of economic, social, …