The comparison of experimental and calculated instantaneous power results, obtained after the different approaches presented in the previous section, is based on instantaneous efficiency measurements for a CPC collector (C = 1.72), as well as on their corresponding steady-state and dynamic efficiency curve parameters. The measurements were made at the Institute for Thermodynamics and Thermal Engineering (ITW) of the University of Stuttgart, Germany.

Two measurement periods were chosen, allowing the validation of power calculation methodologies under different radiation conditions. Values of radiation measured on the collector aperture plane (tilt = 48°, azimuth = 5°, latitude = 50°, albedo = 0.2) and measured instantaneous power values are represented in figures 1a) and b) for both periods. In the first measurement period, the collector was positioned on an EW orientation, whereas in the second period the collector was on a NS orientation. 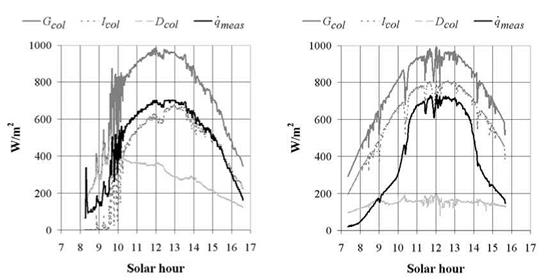 Considering the use of the power correction methodology proposed by Horta et al. (2008) in power calculations after steady-state efficiency test parameters, average diffuse radiation fractions of 0.3 and 0.25 are estimated for the first and second measurement periods, respectively.

It is important to refer, at this point, that not all data presented in the previous figures would be usable for a steady-state test. Actually, as the name suggests, the steady-state test methodology is based upon a collector heat balance assuming stationary conditions.

Furthermore, it must be cleared that these same measurement periods based the determination of the dynamic efficiency curve parameters used in the calculations to follow.