The sun’s altitude over the horizon depends on Latitude and it varies during the year and during the day. Figure 3 gives an example of sun’s altitude considering the Latitude of Firenze (Italy), which is 43.75° North. The altitude of sun over the horizon is reported versus solar time (in hours), from 6AM to 6PM, considering four representative months. Each month curve is obtained averaging the values corresponding to all the days composing the month.

In the North-South positioning, the purpose of the tracking system is to compensate the hourly altitude variations, keeping the symmetry axis of parabolic mirror in the direction of sun’s rays.

In the East-West placement, since the sun tracking acts in the direction perpendicular to the previous one, it cannot compensate the inclination angle corresponding to each hourly altitude of sun over the horizon.

Figures 4-5 illustrate the consequences of the different sun’s altitudes (a), reporting the two extreme cases, of December and June, for the Latitude of Firenze. The maximum value of solar rays inclination, with respect to the vertical direction (a=90°), is achieved in December; the
minimum value in reached in June. For Firenze, the incidence angle of sun’s rays varies from 67° (for a=23° in December in Fig. 4) to 21° (for a=69° in June in Fig. 5). 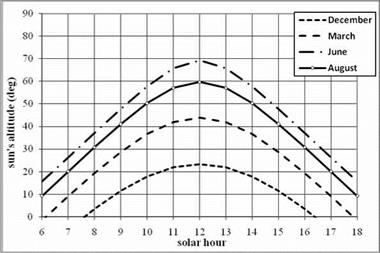 the parabolic mirror. The

effect of misaligning only the mirror, keeping the linear absorber in the N-S direction, is evident at the extremes of the solar trough, especially in Figure 5. Most of sun’s rays are missed and they are plotted in the simulation as cut lines, indicating that they are not received by the absorber. In Figure 4 the very high inclination of solar rays becomes the major cause of rays’ loss.

In order to complete this visual analysis of North-South axis misalignment, Figures 6-7 present a view of the absorber. In Fig. 6 the absorber is kept aligned in the N-S direction and the mirror axis is rotated of 1° with respect to the N-S direction. Whereas Fig. 7 refers to the case of a rigid rotation of both parabolic mirror and absorber, considering an angle P=0.5°.

In the first case, the result is an inclination of the image focused over the absorber surface. In the second case, the image is parallel to the absorber, but it results transversally and longitudinally shifted. In both cases the rays are missed at the absorber extremes, as noted in Figures 4-5. The angle in Fig. 7 is only p=0.5° because for p=1° the effect of the rigid rotation of absorber and mirror would give an image completely out of the absorber. The figures show only the most
significant portion of the absorber, whose centre is considered located in the parabola focus. The simulations have been carried out considering the worse case for the sun’s altitude, in December, with a=23°.

First of all some light is not

received by the entrance aperture of the collector; then part of it is not correctly focused on the absorber, which cannot entirely receive it. This aspect has been studied also introducing an additional lateral mirror to recuperate part of the light that otherwise is not received by the trough aperture. This lateral mirror is obviously vertically placed at the extreme of the solar trough, on the side opposite to the source (right side in Figures 4-5). The configuration considered in this study is characterised by the following parameters: f=800mm, d=50mm, D=60mm, T=3mm.

The light received by entrance aperture and absorber, with and without lateral mirror, is plotted in Fig. 8. The values of received light are expressed in percentage with respect to the incoming sunlight. As previously noted, we prefer to take as reference parameter the sun’s altitude, so the results can be applied to the N-S positioning, as well as, to the East-West placement.

Nevertheless the studies presented in this paper examine only North-South misalignments of collector axis.