Solar Climate of Azores:. results of monitoring at Faial and Terceira islands

The North Atlantic archipelago of Azores (Portugal) consists of nine islands, located about 1,500 km from mainland Europe. Currently the Azores has about 243,000 inhabitants, which depend heavily on imported fossil fuel for their energy supply. This is a concern for the regional Government and its Agency for Energy and Environment, ARENA, which naturally support energy efficiency and use of renewable energies. The Azores are rich in several renewable resources, and have even pioneered Portuguese exploitation of wind, wave, and high enthalpy geothermal energy for electricity generation. However, so far solar energy has not been a priority in the renewable energy panorama, probably because the Azores climate has been considered too cloudy. Nevertheless, this is true only in comparison with the Portuguese mainland, as the radiation levels are probably similar or even better than those of Northern Europe.

In this context ARENA is developing efforts for increasing the use of solar systems. A collaboration, partly financed by an INTERREG III B Project of the European Community, has been established with INETI, the Portuguese Public Laboratory for the area of Energy, to improve the solar climatology of the Azores. This climatology is indeed quite incomplete. It consists mainly on daily measurements for two sites only at the S. Miguel and Terceira islands. Some sunshine records are available from Campbell-Stokes heliographs. Satellite data exists but their quality is uncertain due to the small size of the islands and the shallow view angle.

A measuring campaign was established to gather data on solar radiation, having in mind the data needs for sizing solar thermal and photovoltaic systems in the first place, but also for thermal simulation of buildings. Four meteorological stations were equipped to measure horizontal global solar radiation, ambient temperature and relative humidity. Unfortunately the financial and human resources available did not allow for diffuse radiation sensors.

The first phase of the work addressed the two islands of the eastern group, Sta. Maria and S. Miguel. The current work describes preliminary results for the second phase of the work, which concerned two of the five islands of the central group, Faial and Terceira, see Figure 1 and Table 1. Other efforts are now addressing a third island of this central group, Graciosa.

Station sites were selected according to criteria that included island coverage, representation of microclimatic conditions, safety and reliance of the stations, low horizon obstructions, and placement near populated areas, i. e. those with potential solar energy users. Typical vistas can be appreciated in Fig. 2.

Measurements started by November 2005 and still continue, but the work reports only on the results obtained up to October 2007 (thus about two years).

Figure 3 shows recorded data at Angra, for the year of 2006, as an example. For solar radiation, the extraterrestrial values and clear-sky estimates are also shown. Clear-sky estimates were obtained with the ESRA model (ESRA, 2000) assuming a value of 2 for the Linke turbidity for airmass 2, TLK(2). Figure 4. shows monthly data for the 4 stations.

It is remarked that sequences of clear sky days - and even single clear sky days - are rare situations. On the contrary there are numerous overcast days. The seasonality of radiation data is low compared with continental sites. This feature is especially visible when the clearness index data is analysed: most of the daily values remain in a narrow range of 0.4 to 0.5, complemented with lower values during the Winter and higher values during the Summer, so at the seasonal level, the oscillation is from 0.2 to 0.55 (Fig. 4).

In Figure 5 it can be appreciated that the daily mean profiles of hourly solar radiation are almost symmetrical in respect to solar noon. This is somewhat different from the pattern for continental stations. For the later, it is usual that the afternoon values are a bit smaller than the corresponding morning values, due to larger cloud sizes brought about by the accelerated temperature related convection. 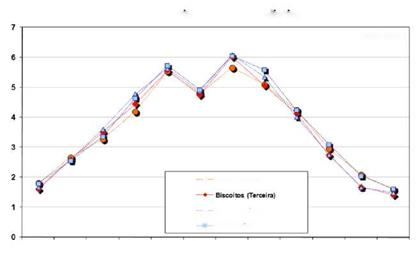 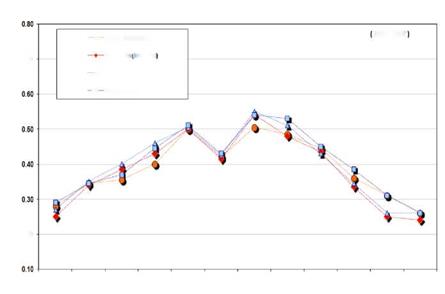 Long term records of sunshine hours are available for some classic meteorological stations operated by the Portuguese Weather Services. It is possible to estimate long term solar radiation data using the well known relationships of relative sunshine and clearness index at the monthly scale.

As simultaneous radiation and sunshine data was not available throughout the Azores region, the usual Angstrom relationship is difficult to apply. The approach taken was instead the one proposed by Suehrcke (e. g. Suehrcke, 2000; Tiba et al., 2002)

A clear sky must be implemented to use the method. Figure 6 illustrates the approach used to obtain a Linke turbidity to feed in the ERA model. Maxima for each Julian day where computed from the data and these where fitted by adjusting the Linke turbidity. For many days and the short monitoring period, only cloudy values where available, so the method is not fully objective in this conditions. Nevertheless an estimate of TLK(2)=4 was obtained. This is higher than for continental unpolluted stations, which typically display values around 3.

Using these turbidity estimates and the recorded sunshine data for 1951-80 (IM, 2003), the climatology obtained is the one presented in Table 2.

Preliminary results of monitoring for 2005-2007 reveal that the climate at the four stations - and therefore at the two islands - is very similar. Daily thermal amplitude is low and relative humidity levels are high, features already expected taking into account the nearby ocean. Atmospheric turbidity apparently suffers from high levels of humidity and marine aerosols.

Some morning-afternoon asymmetry exists but it is small. The findings at the Azores islands suggest that most of the nebulosity there is related to macroscale eddies (the Azores Anticyclone in particular). This would also explain why the data at the northern and southern sites of the islands, and at various islands, are so similar. Indeed average yearly global horizontal irradiation at Terceira island was about 3.65 kWh/m2 per day, slightly less than for Faial island, 3.75 kWh/m2 per day.

Daily radiation sequences do not display long runs of overcast or sunny conditions, but frequent oscillations, reflected in low autocorrelation values of the detrended sequences. However, the most striking aspect is the small seasonality of the various parameters. This was expected for temperature and humidity due to the presence of the ocean and the small size of the islands, but is also true for solar radiation, especially when viewed from a clearness index perspective.

As a result of the monitoring, a clear sly model and a methodology to obtain long term climatic values could be obtained for these islands.

The meteorological records are now being processed to yield Reference Meteorological Years, with the objective of providing better meteorological data for the Portuguese governmental schemes supporting solar energy as well as for the Portuguese building regulation codes (subsidiary to the EU Directive on Energy Efficiency in Buildings). These require that both the summer thermal energy balance of buildings and a mandatory contribution of solar energy be computed through detailed numerical simulation with hourly data - currently obtained from stochastic models not yet tuned for these mid-Atlantic climates.

Benchmarking is the largest activity within the MESoR project. The aim of the benchmarking exercise is to establish a coherent set of benchmarking rules and reference data sets to enable …

Each of the databases analysed here is integrated within a system (software setup) that provides additional tools for search, query, maps display, and calculation of derived parameters. PVGIS (the European …