Considering that C = Aa/Ar, then:

The exergy inflow coming from the solar radiation falling on the collector surface is:

where T, is the apparent sun temperature as an exergy source. In this analysis the value suggested by Petela [107] is adopted, i. e. T, is approximately equal to 3/4Ts, where Ts is the apparent black body temperature of the sun, which is about 6000 K. Therefore, T, considered here is 4500 K. It should be noted that in this analysis T, is also considered constant and as its value is much greater than TO, Ex, in is very near Q. The output exergy from the collector is given by:

whereas the difference between the Ex, in — Ex, out represents the destroyed exergy. From Fig. 18, the entropy generation rate can be written as: 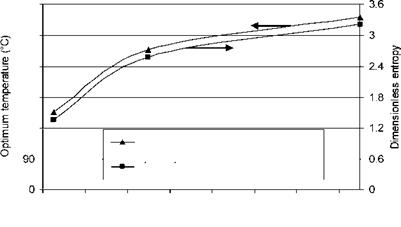 As can be seen from the data presented in Table 8 for high performance collectors, like the central receiver, it is better to operate the system at high flow rates in order to lower the temperature around the value shown instead of operating at very high temperature, in order to obtain higher thermodynamic efficiency from the collector system.

By applying Eq. (60) to Eq. (59), the corresponding minimum entropy generation rate is:

where U* = T*=To. It should be noted that for flat-plate and low concentration ratio collectors, the last term of Eq. (62) is negligible as U* is much bigger than Umax — 1, but it is not for higher concentration collectors, like the central receiver and the parabolic dish ones, which have stagnation temperatures of several thousands of degrees.

By applying the stagnation temperatures shown in Table 8 to Eq. (62), the dimensionless entropy generated against the collector concentration ratios considered here as shown in Fig. 19 is obtained.

So far the analysis was carried out by considering an isothermal collector. For a non-isothermal one, which is a more realistic model particularly for the long PTC, and by applying the principle of energy conservation:

Substituting Eq. (65) into Eq. (64) and performing the necessary manipulations the following relation is obtained:

In reality the heat loss coefficient UL in Eqs (2) and (42) is not constant but is a function of collector inlet and ambient temperatures. Therefore: TOC o "1-5" h …

The term greenhouse effect has generally been used for the role of the whole atmosphere (mainly water vapour and clouds) in keeping the surface of the earth warm. Recently however, …

Simulations are powerful tools for process design offering a number of advantages as outlined in the previous sections. However, there are limits to their use. For example, it is easy …