In the past, there has been claims that all weather and climate changes are caused by variations in the solar irradiance countered at other times by the assertion that these variations are irrelevant as far as the lower atmosphere is concerned [76].

The existence of atmosphere gives rise to many atmospheric and meteorological events. Atmospheric com­position has changed significantly since pre-industrial times, and the carbon dioxide (CO2) concentration has risen from 280 parts per million (ppm) to around 370 ppm today. On the other hand, methane (CH4) concentration was about 700 parts per billion (ppb) but reached to 1700 ppb today, and nitrogen (N2O) has increased from 270 to over 310 ppb. However, halocarbon did not exist at all, but after 1950s, it became in appreciable amounts causing noticeable green­house effects. These concentration increments in the atmosphere since 1800s are entirely due almost to anthro­pogenic activities.

The amount of the solar radiation incident on the earth is partially reflected again into the earth’s atmosphere and then onwards into the space. The reflected amount is referred to as the planetary albedo, which is the ratio of the reflected (scattered) solar radiation to the incident solar radiation measured above the atmosphere. The amount of solar radiation absorbed by the atmospheric system plays the dominant role in the creation of meteorological events within the lower atmosphere (troposphere). For the assess­ment of meteorological events the accurate determination of planetary albedo is very important. On the basis of different studies, today the average global albedo is at about 30% with maximum change of satellite measurement at ± 2%. This change is due to both seasonal and inter-annual time scales. Furthermore, the maximum and minimum albedo
values appear in January and July, respectively. The annual variations are as a result of different cloud and surface distributions in the two hemispheres. For instance, com­paratively more extensive snow surfaces are available in the northern European and Asian landmasses in addition to more dynamic seasonal cycle of clouds in these areas than the southern polar region. 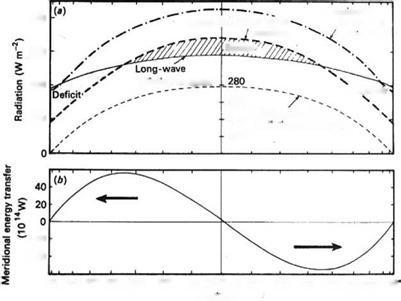 Other causes in the albedo variation are the sun elevation, the distribution and type of clouds, and finally, the surface albedo. The absorbed solar energy has maximum values of 300 W/m2 in low latitudes. The planetary radiation is dominated by emission from the lower troposphere and shows a decrease with latitude. Such a decrease is at a slower rate than the decrease in the absorbed solar radiation energy. At latitudes less than 30° the planetary albedo is relatively constant at 25%, and consequently, there are large amounts of solar radiation for solar energy activities and benefits in these regions of the earth. However, the solar absorption exceeds the planetary emission between 40°N and 40°S, and therefore, there is a net excess in low latitudes and a net deficit in high latitudes. Consequently, such an imbalance in the solar radiation energy implies heat transfer from low to high latitudes by the circulations within the atmosphere. Accordingly, the solar energy decreases steadily from the equator towards the polar region. It is possible to state that the natural atmospheric circulations in planetary scales are due to solar energy input into the planetary atmosphere. In order to appreciate the heat transfer by atmosphere, the difference between the absorbed and emitted planetary solar radiation amounts can be integrated from one pole to other, which give rise to radiation change as in Fig. 10. It can be noted that maximum transfer of heat occurs between 30° and 40° of latitude and is
approximately equal to 4 X 1015 W. The regional change of net solar radiation budget is shown in Fig. 11, which indicates substantial seasonal variation as a result of seasonal solar distribution.