Terrestrial solar irradiation estimations are obtained mostly from the sunshine duration measurements through almost linear models such as the classical Angstrom formulation (Eq. (36)). The parameters of such models are estimated through the least squares or other technique in practical studies as explained above. In this section, a more efficient model based on the fuzzy system concept is proposed for the architecture of solar irradiation estimation from the sunshine duration measurements. Especially, partial fuzzy modeling accounts for the possible local nonlinear features in the form of piecewise linearizations. The parameters estimation of such a fuzzy model is achieved through the application of genetic algorithm technique. The fuzzy part of the model provides treatment of vague information about the sunshine duration data, whereas the genetic part furnishes an objective and optimum estimation procedure. It must be stated at this stage that the use of modern techniques such as fuzzy logic, artificial neural networks and genetic algorithms are very new in the solar radiation estimation studies [46,49,50,106,111,127,128].

Herein, the only effective agent on the terrestrial solar irradiation is assumed as the sunshine duration similar to the basic Angstrom approach in Eq. (36), but rather than a global regression line fitting, a piecewise linear model is proposed on the basis of fuzzification of the sunshine duration variable. The model parameters are estimated by using the genetic algorithm methodology.

The pioneering work by Zadeh [138-148] on the concept of fuzzy sets, logic and systems led many researches in different disciplines to consider vague variables in their modeling with imprecise measurements. Consequently, fuzzy concept of any variable provides a basis for the linguistic categorization of the variable in an uncertain manner. The uncertainty type is not quantitative but rather qualitative, and vague in terms of linguistic atomic words such as small, medium, big, hot, deep, high, etc. A detailed account of the fuzzy sets and logic is given by Ross [105] and Sen [129] for the solar irradiation estimation. Herein, fuzzy logical propositions are used in the forms of

IF-THEN statements. Among a multitude of propositions, two of them are given below for the sake of argument.

IF sunshine duration is long THEN the solar irradiation amount is high, or

IF sunshine duration is short THEN the solar irradiation amount is small.

In these two solar energy propositions sunshine duration and solar irradiation are described in terms of linguistic variables such as long, high, short and small. Indeed, these two propositions are satisfied logically by simple Angstrom formulations. These linguistic variables explain only certain sub-parts of the whole variability domain. It can be understood from this argument that a set of relationship is sought between two variables as in Fig. 22, which shows the architecture of two-variable fuzzy proposition collection. For our purpose, the first three boxes on the same line represent sunshine duration linguistic words with the second line three words for the solar irradiation. Hence, it is possible to infer 3 X 3 = 9 different IF-THEN propositions from this figure. The question that still remains is whether the boundaries between the linguistic words in each line are distinct from each other or there may be some overlaps. Logically, it is not possible to draw crisp boundaries between subsequent words. For this purpose, Fig. 22 can be rendered into a more realistically valid architectural form as shown in Fig. 23 where there are interferences (shaded areas) between the sunshine duration (solar irradiation) linguistic words on the same line. The overlapping areas between the atomic words indicate fuzzy regions. It is also logical to think that as the linguistic word domain gets away 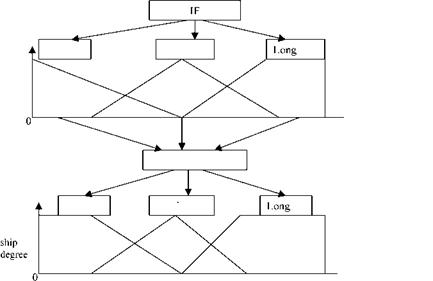 a terminology, zero represents non-belongingness to the word concerned, whereas one corresponds to full belong­ingness. These belongingness numbers, between 0 and 1, are referred to as the membership degree in the fuzzy sets theory. Hence, it becomes evident that the new architecture of the logical prepositions will appear as in Fig. 24. Solutions with the architectural form in Fig. 24 are already presented by Sen [127,129] for solar irradiation estimation. In such an approach, there is no mathematical equation involved. However, in engineering applications, most often equations, although simple and linear, are sought for rapid calculations. For this purpose, the architecture in Fig. 24 can be changed into the one in Fig. 25 with crisps mathematical forms after the THEN part of the logical propositions. In the fuzzy logic terminology, the premises of the productions are vague in terms of fuzzy subsets, whereas the consequent

parts are adopted in the form of the simplest linear partial mathematical equations.