In order to design a solar energy powered device, it is necessary to know how the power density will vary during the day at the site concerned seasonally. It is also important to consider the tilting of the collector surface with the horizontal. As has already been explained earlier, it is possible to consider the solar radiation in two parts. Namely, direct radiation and scattered or diffuse radiation. In practical terms, direct radiation gives rise to sharp shadows, and it is the amount of radiation directly received from the sun without disturbance. Diffuse radiation, however, is disturbed after entering the troposphere by clouds, aerosols, dust and some gasses. Direct radiation has one direction but the diffuse radiation does not show up sharp shadows and comes from every direction. The intensity of diffuse radiation is much less than the direct radiation. In the solar engineering device designs, most often the direct radiation amounts are significant. The relative proportions of direct to diffuse radiation depend on the day of the year, meteorological conditions and the surrounding site. The diffuse component on a clear day is not more than 20% depending on the circumstances. On an overcast day this proportionality may become almost 100%.

The flat plate collectors are based on two important principles. First, the black base absorbs the solar radiation better than any other color. Second, in Fig. 28 the glass lid for heat keeping shows the cross-section of the commonly used flat plate collectors. Its surface should be located perpendicularly to the solar radiation direction for the maximum solar energy gain. Herein, sun’s ray goes through the glass cover and the air layer to warm up the black metal plate. The black metal plate warms the water layer. 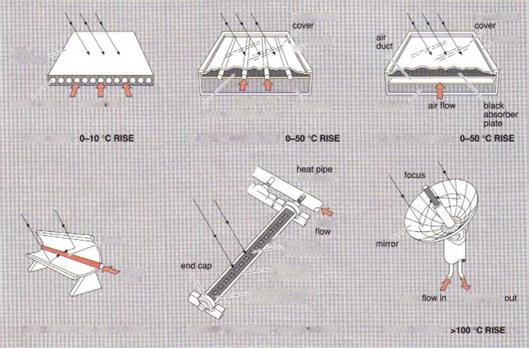 Unfortunately, the ordinary metal plate is also warmed up. The heat insulation lagging keeps most of the heat inside the sandwich. Thus, with the warm in the water, it has now to be moved to where good use can be made of it. The simplest method for achieving this water movement is shown in Fig. 29 as the ‘thermo-siphon’ system. Its operation is based on one of the simple facts that hot water will rise to settle above a quantity of cooler water. As the collector heats up the water rises out at the upper pipe and pushes its way into the top of the tank. This hot water then displaces some of the cold in the tank, pushing it down and out of the bottom. This heat-induced circulation is completed as the water, being pushed down the pipe, comes round the bottom and back into the collector.

In practice, different types of solar collectors are given and the most primitive are the unglazed panels which are the most suitable for swimming pool heating where it is not necessary for the collectors to rise more than a few degrees above ambient air temperature, so heat losses are relatively unimportant. On the other hand, flat plate collectors are the main apparatus for domestic solar water heating. These usually have single glaze in addition to the second glazing layer, if necessary. The more elaborate the glazing system, the higher the temperature difference that can be sustained between the absorber and the external wall. It is necessary that the absorber plate should usually have a black surface with high absorption. In general, most black paints reflect approximately 10% of the incident radiation. On the other hand, flat plate air collectors are mainly used for space
heating only. These types of collectors are connected with photovoltaic panel for producing both heat and electricity. Evacuated tube collectors in Fig. 29 are in the form of a set of modular tubes similar to fluorescent lamps. The absorber plate is a metal strip down the center of each tube. Vacuum in the tube suppresses convective heat losses.

Flat plate collectors are usually roof mounted and their tracking of the sun is not possible. They are subject to many external events such as frost, wind, sea-spray, acid rain, and hail stones. They must also be resistant against the corrosion and significant temperature changes. Low-temperature flat plate collectors are able to rise the water temperature up to boiling point in summer seasons, provided that they have double-glaze and the water circulation is not fast enough to carry away the heat quickly. These may have only few square meters of area. In order to collect enough solar energy to supply the winter demand, the collectors would have very large areas, but in such a case, its solar energy production during the summer seasons will not be totally exploited. This means wastage of the capital expenditure. On the other hand, if the house is insulated properly, it is not necessary to have large areal collectors, because the energy need will be small. Here lies the key problem in active solar space heating as either to isolate the house to have less energy demand or to built poorly insulated houses and try to implement solar energy for space heating.

Sun’s apparent motion changes this angle continuously during the day, and accordingly the collector must be moved for collecting the maximum solar energy. For this purpose, tackling collectors are produced and they collect theoreti­cally about p/2 times more energy per day than the fixed ones. Of course, much of this advantage is lost if a large fraction of the total radiation is diffuse.

In practice, most often the collectors do not move, and therefore, they must be located such that during one day the maximum of the solar radiation can be converted into solar energy. For this reason, fixed collectors are located to face south (north) in the northern (southern) hemisphere. Hence, for a given latitude there is a certain angle, which yields the maximum solar energy over the year. As a practical rule for low latitudes the angle of the collector is almost equivalent to the angle of latitude, but increases by 10° at 40°N and 40°S latitudes. All these arrangements are for flat surfaced collectors. Typical temperatures that can be achieved by flat plate collectors vary between 40 and 80 °C depending on the astronomic, topographic and meteorological conditions. In a flat plate collector, the energy incident on the surface cannot be increased and all that can be done is to ensure that surface absorbs as much as possible of the incident radiation, and that the losses from this surface are reduced as far as possible. Fig. 30 shows a flat plate collector. Some of the incident radiation is lost by reflection but for a blackened surface about 95% of the radiation is absorbed. The heat losses from flat plate collectors are shown in the same figure. In these collectors the lower surface has usually insulating

layer of material such as several centimeters of glass wool. The heat can be lost through the following mechanisms,

These heat lost mechanisms will be explained later in this paper. On the other hand, it is necessary to have tilted surfaces for the maximum solar energy collection. The tilt angle is dependent both on the latitude and the day of the year. If the tilt angle is equal to the latitude then the sun's rays will be perpendicular to the collector surface at midday in March and September. For the maximization of solar collection in the summer, it is convenient to tilt the surface a little more towards the horizontal. However, for the maximization in the winter, the surface is tilted more to the vertical. Fortunately, the effects of tilt and orientation are not particularly critical. Table 4 presents totals of energy incident on various tilted surfaces in London region.

Instead of flat plate collectors, solar ponds are used for thermal electricity production. They are similar to large salty lakes as shown in Fig. 31. In such a pond, salty water is at the bottom with fresh water at the top. The n salt concentration difference creates a gradient. The incident solar radiation is absorbed directly from the sun radiation in the bottom of the pond. The hot and salty water cannot rise, because it is heavier from the fresh water at the top layer.

Hence, the upper fresh water layer acts as an insulating blanket and the temperature at the bottom of the lake can reach 90 °C.

The thermodynamic limitations of the relatively low solar-to-electricity conversion efficiencies are typically less than 2%. One of the main advantages of the solar pond system is that the large thermal mass of the pond acts as a heat store, and electricity generation can go on day or night, as required. However, large amounts of fresh water are needed to keep the solar pond running with proper salt gradient.