Figures 2a) and 2b) illustrate, for both measurement periods, measured (Qmeas) and calculated instantaneous power values, after both steady-state efficiency parameters (uncorrected - Qss - and corrected - Qss corr - calculations), form Eqs.(3) and (5), and dynamic (Qdyn ) efficiency test parameters, after Eq.(4). 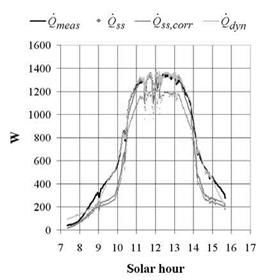 Regarding steady-state test parameters based calculations, integration of measured and calculated power curves in figure 2 yields, for the first measurement period, energy underestimations of 19.7% and 6.5% for uncorrected and corrected calculations, respectively. For the second measurement period, these results change to 21.3% and 10.8% underestimations, respectively.

More than accuracy purposes, which can not be assessed in this case considering that test parameters were produced after these same measured results, the results presented for dynamic test parameters based calculation illustrate the dynamic response of the method.

The results obtained for both measurement periods reveal higher deviation from measured value, for the steady-state based calculation, whenever steep variations on irradiation conditions occur, as clearly illustrated in fig.2b) for the periods between 09.00 - 10.30 and 14.00 - 15.30. This result is in line with the base assumptions of such methodology which does not account with transient conditions, as in the dynamic methodology accounting a time dependent temperature variation term.

Considering the use of steady-state parameters, by far the most commonly available for marketed collectors, these results also clear the advantage of using the power correction methodology proposed by Horta et al. (2008). In fact, for both measurement periods, the results obtained after this methodology present closer results to measured values throughout the entire set of measurements. Lacking, in the same way, a dynamic response to steepest irradiation variations (which the power

correction methodology did not claimed to correct), such power correction presents particularly good results in mid-day periods, where milder variations where observed.

The different algorithms were presented, including the application of an algorithm for correction of power/energy results to steady state results as proposed by Horta et al. (2008). Application of these algorithms to two days of measured data allowed for a comparison of the results obtained with these different methodologies.

• calculations based in dynamic test parameters, accounting for transient conditions after adoption of a time dependent temperature variation term, reveal a closer response under such conditions;

• considering the use of steady-state parameters, by far the most commonly available for marketed collectors, the use of the power correction methodology proposed by Horta et al. (2008) leads to more accurate results, revealing better results throughout the entire set of measurements and particularly good results under irradiation conditions closer to stationarity (milder variations, as in mid-day periods).

Furthermore, and regarding the algorithm for correction of power/energy results to steady state results proposed by Horta et al. (2008), these results validate its application against measured results of independent test of a general product. The results obtained recommend its adoption in the different software tools making use of steady-state efficiency test results.