Fig. 1. Set-up of the air-collector testing loop for efficiency measurements

Information on the components of the loop are summarised here, and will be commented after the list:

• four temperature sensor (TR) to measure the inlet - and outlet-temperature of the collectors, and temperature measurement points necessary to determine the density and the heat capacity of the air at the flow sensors

Compared to a water-collector test loop, we added some additional features due to our testing experience with air-collectors:

1. Not one, but two air ventilators are used. Although in principle solar air-collectors should be tight and do not have leakages in the absorber, many of them (especially at the beginning of a development process) are not air tight. This is disturbing the efficiency measurements. It is therefore very helpful, if two ventilators are installed in the test loop. Because they can be operated in such a way (one is pushing air, the other is sucking air) that with the proper adjustment as a result there is only a small difference between the absolute pressure of the air in the collector and the pressure of the ambient air. Thus, air leakage does only have a small influence on the efficiency measurement and development measurements can be carried out in a reproducible was. Of course, the air leakage rate is nevertheless important for the performance of a collector and should be measured and reported in separate measurements. And as mentioned already, the collector should be air tight.

2. Water is an incompressible fluid, but air is not. Therefore the influence of the absolute pressure of the fluid has to be taken into account. Figure 2 shows the dependence of air density on temperature and pressure. The variation within the typical measurement boundaries can be seen from Figure 2. In any case, the influence can easily be included in the measurement and evaluation procedures. 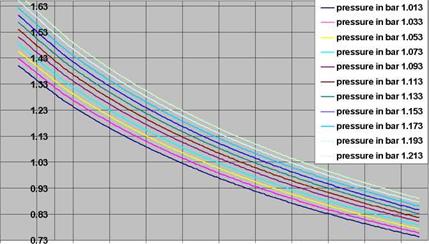 Figure 2: Dependence of air density on pressure and temperature.

Figure 3: Dependence of specific heat capacity of air on temperature and humidity (xw20 denotes an