The experiments are carried out in a domestic hot water tank and a space heating tank. Both tanks are of steel and have a volume of 400 litres with an internal height of 1.4 metres.

The fabric inlet stratifiers consist of two concentric fabric pipes, with diameters of 40 mm and 70 mm and the pipes are closed at the top. The pipes are mounted in a circle as shown in Fig. 2. The fabric inlet stratification pipes are secured at the cap in the bottom of the tanks, which is the only opening in the tank and spread over 93% of the tank height. Heating tests where cold tanks are heated with hot water through one fabric stratifier at the time, then cooled down again/heated again and so on are carried out during the test period. Tank temperatures, inlet and outlet temperatures and the volume flow rate through the inlet stratification pipes are measured during the whole test period.

Table 2 shows the investigated fabric styles and the main results. Most likely there is a problem with deposits of lime attached to all pipes in the domestic hot water tank resulting in a strongly decreased ability to build up thermal stratification for all the fabric pipes tested.

In Fig. 3 - Fig. 5 normalized temperatures as functions of the height in the tanks obtained during heating periods are shown in the middle and at the end of the test period. For example, the heating curves for the fabric inlet stratification pipes style 769, 700-12 and 981 are shown for tests with a volume flow rate of 6 l/min, inlet temperatures of 44°C - 46°C over a time period of five months.

In order to quantify the mass of the deposits attached to the fabric pipes, the pipes were taken out of the tanks and weighted. Figure 9 shows the gained weight of each fabric pipe. 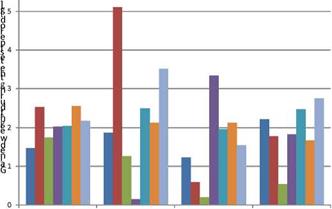 The long time durability of seven different fabric inlet stratification pipes is investigated experimentally in a domestic hot water tank and in a space heating tank. The results show that the lime contained in the domestic water is deposited in the fabric pipes in the domestic hot water tank and that this destroys the capability of building up thermal stratification for the fabric pipe. The results also show that although dirt, algae etc. are deposited in the fabric pipe in the space heating tank, the capability of the fabric inlet stratifiers to build up thermal stratification is unchanged for five of the seven fabric pipes within an operation period corresponding to operation of a solar heating system with a solar collector area of 10 m2 with a volume flow rate of 0.2 l/min per m2 solar collector area in 2/3 year.

Most likely the deposits result in rigid inflexible pipes while dirt and algae deposits, at least for a long period, do not destroy the flexibility of the fabric pipes.

The investigations have also shown that there is a need for further research on:

• The influence on the amount of deposits of dirt, algae etc. in the fabric pipe by adding e. g. an anode for corrosion protection and additives to prevent algae growth in the space heating tank used for the durability tests

T Measured temperature in the tank during the experiment [°C]

Ttank, start Measured temperature in the tank at the beginning of the experiment [°C]