For each exposed sample a transmission spectrum was measured; in the beginning utilizing a manually operated Zeiss-Spectrometer and since 1995 with computerized Fourier Transform Spectrometers (Bruker, IFS 66), all equipped with integrating spheres. These spectra were used for the calculation of the solar transmittances based on an AM 1.5 solar spectrum (ISO 9845). In order

to approve the comparability of the different instruments, measurements performed on unexposed reference plates in the year 1985 were compared with re-measurements of the same samples in 2005. The comparison of 36 measurements resulted in a deviation of only 0.2 ± 0.5 % (relative) confirming the good comparability of these measurements. To investigate the effect of soiling half of each sample was cleaned with mild soap and a soft sponge to be measured separately. Some of the samples were additionally cleaned with ethanol to get a better differentiation of soiling and degradation effects.

An overview of the losses in solar transmittance of the tested materials after 20 years of exposure is given in Fig. 3. The losses reported after 20 years are lower than after 10 years of exposure because of heavy rainfalls in the run-up to the sample collection in 2005, which led to non­negligible cleaning effects. Multi-skin sheets and sinuous plates are not considered in this study. For these samples additional losses were observed as a consequence of the special form and not as a material property. Detailed analysis of the weathering properties of the different materials are presented as follows.

Modern collector glazings are mainly made of low Fe glasses because of their good durability and high transmittance. The influence of a structured surface for reflex reduction (prism-like structure in the dimensions of millimetre fractions) on the soiling property of such glasses was investigated in this study. In Fig. 1 the losses in transmittance of samples with a structured surface are compared to the losses of the samples with a smooth surface. No difference according to their total transmittance losses could be identified between these two groups; the structure did not lead to increased soiling.

Eight samples of iron containing float glass were included in this test. No clear difference in terms of losses in transmittance could be identified between samples with the tin-rich float side or the tin - poor side exposed (i. e. oriented to the ambient). For both glass types losses in transmittance in the range of 10 % (relative) were observed in Rapperswil after 20 years of exposure (without cleaning). After ten years of exposure the losses were even higher due to less rainfall in the time before sample collection. At the rural site of Davos only small losses in the range of some percent were observed over the whole test period. As shown in Figure 2 on the example of float glass, the cleaning with mild soap lowered the losses to about half of the initial value. A further amelioration was achieved by the cleaning with ethanol. A slight increase in transmission that was observed around the wavelength of 1 pm was probably caused by a photo induced oxidation of Fe2+ impurities [2].

for the 20 year old glass samples from Rapperswil. 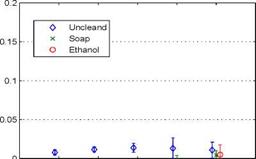 In the unexposed state the UV-absorbing effect of some protective additives was observed for all PMMA types but with different efficiencies (the full lines in Fig.4). For four of the six types this UV-blocking property remained over the whole 20 years of exposure, similar to the sample declared as ‘strong UV-absorbing’ in Fig. 4. They proved to be suitable for the use as UV-blocking layer to protect other materials. For the other two PMMA-types a continuous gain in transmittance in the UV-range was observed over the duration of exposure. This deterioration of the UV - blocking mechanism did not cause any other visible material degradation. For these samples even a slight gain in solar transmittance was observed due to the gain in the UV-region. But it is known from artificial weathering of PMMA that some photo-degradation in the form of chain braking exists and affects the mechanical properties [3].

The two tested PMMA sinuous plates with glass fibre reinforcement suffered from large losses in transmittance caused by fissures in the polymer matrix similar to the UP samples (see 4.5. UP).

For all tested PC-types material degradation was observed including yellowing, surface roughening and even biological infestation for some samples exposed in Rapperswil. PC degradation is caused by photo-Fries and photo-oxidation processes caused by UV-irradiation. These reactions are influenced by additional parameters as humidity and temperature resulting in a roughened layer of degraded material of variable thickness at the sample surface [4]. In this case of open exposure a macroscopic removal of material from the surface was observed and quantified. After 20 years the

loss in plate thickness was for all PC-types and at both exposure sites in the range 0.1 mm. In Fig.

5 the loss in plate thickness as a function of the exposure time is shown for one sample, which was exposed in Davos. This figure shows that the material removal started shortly after three years of exposure, which coincides with a lifetime estimation of three years determined by Ram et al. [5]. The exact loss in transmittance due to material degradation could not be determined as soiling can not be cleaned without irritating the weathered surface. A good estimation can be taken from the total losses in Davos, where for other materials as glass or PMMA the contribution of soiling to the total losses in solar transmittance was small. Despite of a visible yellowing the solar transmittance only decreased by 3.3-7.7 % of which a small part is still caused by soiling. For the tested PC-types the cleaning effect of heavy rain in the period before of the 20 years sample collection was more pronounced than for other materials. An elevated gain in transmittance between 10 and 20 years of exposure is caused by the fact that not only soiling but also peaces of weathered polymer were removed from the surface by rainfall. A regain in transmittance for long exposure times was also observed in artificial weathering tests by Tjandraatmadja et al. [4] who identified photo-bleaching of the yellowed layer to be the cause of this effect. The PC films (thickness 0.375 mm) were mechanically destroyed as a consequence of material degradation.

All fluoropolymers suffered from unexpected high losses in transmittance. In the case of PVF and FEP these losses were only caused by soiling; by cleaning with ethanol the initial transmittance could be recovered even after 20 years of exposure, see Fig. 6. The losses from soiling were in the range of ten percent or more, even in Davos where comparable losses of glass or PMMA were in the range of only one to two percent. For collectors with FEP or PVF glazing a regular cleaning is important to reduce losses in efficiency caused by soiling. For ETFE the effect of cleaning was small (exception: sample No. 1 from Rapperswil). The losses of these samples are caused by persistent soiling or actual material degradation. In contrary to FEP and PVF, this polymer contains unfluorinated ethylene which could serve as point of attack for degradation mechanisms.

Fig. 6. Overview of the transmittances of all tested fluoropolymer sheets. The values of the ethanol cleaned
20 years old samples are compared to the values of the different soiled samples.

All tested UP samples were reinforced with glass fibres. Similar to the reinforced PMMA plates, these samples suffered from high losses in transmittance. Fissures arise from dilatation differences of the UP matrix and the glass fibres due to high temperature changes or water accumulation [6]. Near the surface the UP matrix broke and the fibres poked out of the surface. This roughened surface lead to increased accumulation of soil. On the samples which were exposed in Rapperswil additional biological infestation was observed after 10 and 20 years of exposure.