Different SDHW systems (thermosiphon systems, integrated collector-storage systems and forced - circulation systems) have been tested at Fraunhofer ISE since 1997 The testing facilities for pre­assembled systems have now been expanded to satisfy the growing demand of these tests according to the European testing standard EN 12976. From now on it is possible to perform up to four tests of SDHW systems at the same time. Furthermore, it will be possible to carry out tests of heat storage tanks.

The parameters of the systems are experimentally determined by an outdoor test with a number of testing days. The boundary conditions like daily irradiation, ambient temperature and cold water inlet temperature for a testing day to be valid are defined in the testing standard.

A simulation is carried out using the parameters which were determined in the efficiency test. The performance prediction simulations are carried out for different reference locations (Wurzburg, Stockholm, Davos and Athens are the standard locations but the calculations can be carried out also for other locations.).

Functional tests on the system

The aim of the freeze resistance test is to check whether the necessary precautions have been taken to protect the system from temperatures below zero.

Within the pressure resistance tests all circuits are checked on their ability to hold and withstand pressure.

Ability of the solar-plus-supplementary-system to cover the load

The intention of this test is to assess the ability of the system to provide the maximum daily load on days without contribution out of the solar loop.

The test is done to make sure that the system is able to withstand a period of high solar radiation without hot water drawn from the tank. The intention is also to make sure that no dangerous situations occur for the user. 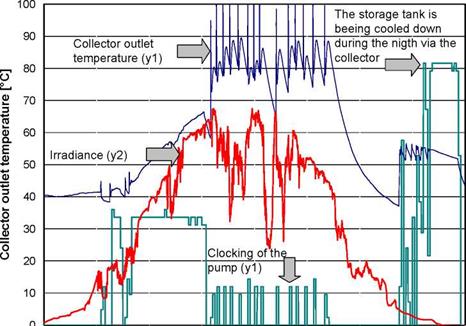 Fig. 3. Measurements of an over temperature test. The graph shows the irradiance, the power consumption of
the pump in the collector loop and the outlet temperature of the collector array (as mean values averaged
over five minutes). By means of the controller of the system the pump is operated intermittingly in order to
prevent the collector from overheating. The storage tank is cooled by the collector (it is a selective flat plate
collector in this case) until a certain threshold temperature is reached. The test showed that the risk of a
stagnation phase with evaporation of the fluid in the collector loop is reduced sufficiently..

Functional tests on the collector

Additional functional tests are performed on the collector of the system unless a complete test according EN 12975 has been performed already. The tests include: