The Coefficient of Performance (COP) is used to describe the performance of a heat pump system. It is defined as the ratio of energy released in the condenser coil and water tank to energy used to run the compressor.

where Xpp is defined as:

The meteorological condition for the day during the experiment conducted in December is shown in Figure 2. It can be seen that the ambient temperature is relatively constant with a value close to 30 °C. The maximum solar radiation value reaches around 1000 W/m2, and it varies during the period of measurements with the lowest value around 400 W/m2

The efficiency of the liquid solar collector is shown in Figure 4. The collector, at 2 m2, has an efficiency in the range of 50 to 60 percent. As shown in Figure 5, the coefficient of performance (COP) tends to have a relatively stable value. It varies between 8 and 9. 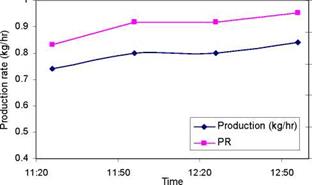