First system tests determined the maximum achievable air temperature in the treatment chamber. Later testing verified that the solar system was able to match required heating/cooling ramps. Some typical T-t curves used in the ceramics industry were chosen as an example.

The results of the most representative ‘maximum temperature test’ can be seen in Figure 4#, where the maximum achievable temperature with a solar irradiance of 980 W/m2 is 1000°C. It is worth mentioning that this limit is set by the receiver material, as its 1180°C safety limit was measured with the solar furnace shutter open only 85%.

The absorber material is a ‘SiSiC’ ceramic, chosen because of its proven availability and good performance in volumetric receivers at the PSA9.

When upper system limits had been determined, testing for facility suitability for complex T-t cycles was begun. 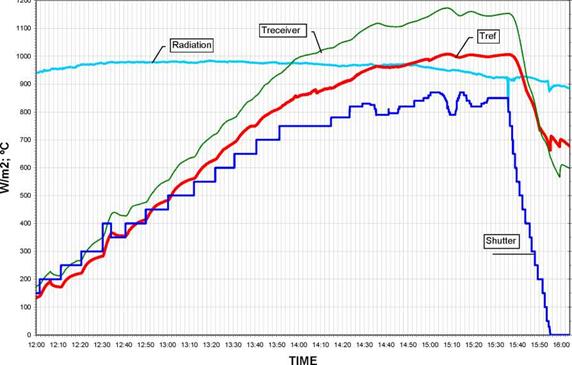 The theoretical ceramic drying cycle T-t curve, in which a maximum temperature of 150°C must be achieved in 40 minutes, followed by a steep cooling ramp down to ambient temperature is shown in Figure 6.

As seen in Figure 5, there was no problem in following the required heating ramp. On the contrary, difficulties arose in accomplishing the desired cooling ramp. The air-cooling system may have to be specifically modified to increase the inlet cooling-air flow when necessary to solve this problem.

Fig. 5. Results of a drying test

Finally, ceramic baking was also tested in a higher temperature range, in which a maximum temperature of 800°C must be reached in 10 minutes, as seen in Figure 6. Test results were quite satisfactory.

Tref Temperature in the center of the treating chamber (°С)

A project has been launched to study the feasibility of using concentrated solar energy for high - temperature industrial processes, such as ceramics manufacturing. A solar device (see Figure 7), based on the well-proven volumetric receiver technology has been designed, manufactured and assembled in the PSA Solar Furnace.

Preliminary testing has been performed to:

Results so far are encouraging, as a maximum temperature over 1000°C has been reached in the air stream, and the system has been proven able to match the heating ramps quite well, which will allow all the selected processes to be studied.

Nevertheless, we are working in several aspects that still can be improved, and new results will be presented in future works.