Application of the Divisia index to energy use in the U. S. economy illustrates the importance of energy quality in aggregate analysis. The quality-corrected index for EROI indicates that the energy surplus delivered by petroleum extraction in the United States is smaller than indicated by unadjusted EROI. The trend over time in a quality-adjusted index of total primary energy use in the U. S. economy is signifi­cantly different, and declines faster, than the standard heat-equivalent index. Analysis of Granger causality and cointegration indicates a causal relationship running from quality-adjusted energy to GDP but not from the unadjusted energy index. The econo­metric analysis of the E/real GDP ratio indicates that the decline in industrial economies has been driven in part by the shift from coal to oil, gas, and primary electricity. Together, these results suggest that ac­counting for energy quality reveals a relatively strong relationship between energy use and economic out­put. This runs counter to much of the conventional wisdom that technical improvements and structural change have decoupled energy use from economic performance. To a large degree, technical change and substitution have increased the use of higher quality energy and reduced the use of lower quality energy. In economic terms, this means that technical change has been ‘‘embodied’’ in the fuels and their associated energy converters. These changes have increased energy efficiency in energy extraction processes, allowed an apparent decoupling between energy use and economic output, and increased energy efficiency in the production of output.

The manner in which these improvements have been largely achieved should give pause for thought. If decoupling is largely illusory, any increase in the cost of producing high-quality energy vectors could have important economic impacts. Such an increase might occur if use of low-cost coal to generate electricity is restricted on environmental grounds, particularly climate change. If the substitution process cannot continue, further reductions in the E/ GDP ratio would slow. Three factors might limit future substitution to higher quality energy. First, there are limits to the substitution process. Even­tually, all energy used would be of the highest quality variety—electricity—and no further substitution could occur. Future discovery of a higher quality energy source might mitigate this situation, but it would be unwise to rely on the discovery of new physical principles. Second, because different energy sources are not perfect substitutes, the substitution process could have economic limits that will prevent full substitution. For example, it is difficult to imagine an airliner running on electricity. Third, it is likely that supplies of petroleum, which is of higher quality than coal, will decline fairly early in the 21st century. 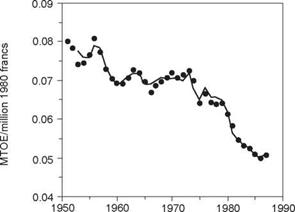 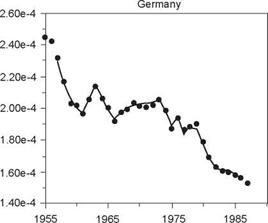 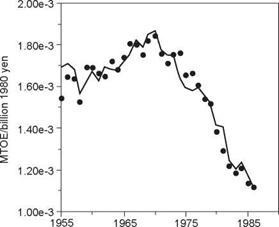 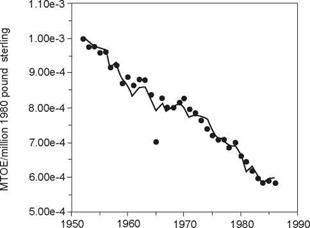 Finally, our conclusions do not imply that one­dimensional and/or physical indicators are univer­sally inferior to the economic indexing approach we endorse. As one reviewer noted, ecologists might raise the problem of Leibig’s law of the minimum, in which the growth or sustainability of a system are constrained by the single critical element in least supply. Exergy or mass are appropriate if the object of analysis is a single energy or material flux. Physical units are also necessary to valuate those flows. Integrated assessment of a material cycle within and between the environment and the economy is logical based on physical stocks and flows. However, when the question being asked requires the aggrega­tion of energy flows in an economic system, an economic approach such as Divisa aggregation or a direct measure of marginal product embody a more tenable set of assumptions than does aggregation by one-dimensional approaches.

Aggregation using price has its shortcomings. Prices provide a reasonable method of aggregation if the aggregate cost function is homothetically separable in the raw material input prices. This means that …

The history of human culture can be viewed as the progressive development of new energy sources and their associated conversion technologies. Advances in our understanding of energy have produced unparalleled …

ECONOMIC GROWTH, DEMAND, AND ENERGY USE

On a per capita basis, rising demand for mobility is well correlated with growth in gross domestic product (GDP)—a measure of national economic activity—across a wide variety of economic, social, …